The Creation of a Vacation Paradise * Cancun History

Posted by Admin0 CommentsPosted in Books

Cancun’s story begins in the late 1960s. The then-Mexican President Echeverría wanted to build a tourist resort on the Yucatán Peninsula. The place should be bigger and even more exciting than Acapulco on the west coast of Mexico. At that time, Mérida was the only major city in Yucatán.

The city is located in the east of the Mexican peninsula. It was decided to go to a place east of the peninsula on the Caribbean Sea. There was a small fishing village nearby called Puerto Juarez.

The name of the selected location was Snake’s Nest, translated into the Mayan language “Cancun.” At that time, the area consisted partly of dense jungle, through which only a small road ran, on which one could reach the eastern part of the Yucatán peninsula. Building a popular tourist destination, there was the first major project of the Mexican government. In the first twenty years, the Mexican government put a lot of money into the Cancun project with the Banco de México. The entire infrastructure first had to be set up.

The area in and around Cancun first had to be developed with roads, electricity, and fresh water. Construction of the international airport began in the early 1970s.

From the Drawing Board to The First Groundbreaking

The planning draft comes from Agustín Landa Verdugo. The elongated island, which lies in front of the Yucatán peninsula, became a pure tourist island. Cancún city was founded on the mainland. At the beginning of hotel construction on the beach in Cancun, Tulum was originally planned as a residence place for the many people employed in tourism. The first shelters and storage facilities for a small group of workers were established in January 1970. The island was divided into parcels on the drawing board.

The entire beach on the island still belongs to Mexico’s state; it has not been sold. This ensures that the beach is still available to tourists today. The area of Cancún and the surrounding area cover approximately 50,000 square kilometers. To set up a completely new infrastructure initially, a loan of 21.5 million dollars was approved in September 1971.

The most important was the construction of the road that led from the coast to Cancun. It was Cancun’s lifeline until the airport was completed. The airport – Cancun International Airport – was inaugurated in February 1975. From then on, tourists could easily reach the resort by plane. 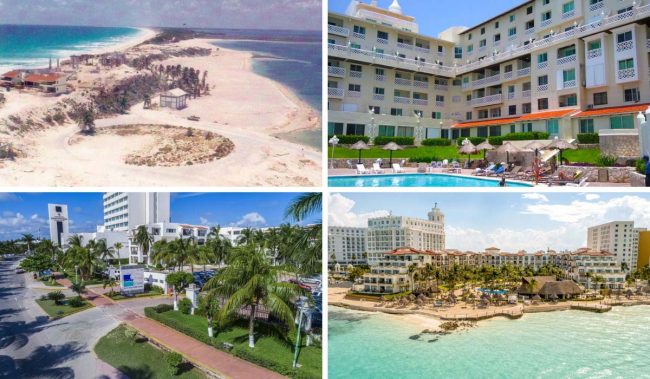 The opening of the first hotel took place in September 1974. The government agency INFRATUR checked the expansion of the new tourist resort. Then, in 1974, FONATUR (Fondo Nacional de Fomento al Turismo) was developed. This institution still deals with the planning of tourist infrastructures in Mexico today.

With the loans’ support, Hotel Aristos Cancun, Los Condominios Kin-Ha, and Villas del Presidente Cancun started in 1974. Fonatur approved the loan of 260 million dollars in total. Over time, an additional $ 700 million was approved to build nearly ten thousand rooms. In 1997 the 124 hotels on site were already offering well over 20,000 rooms. Almost three million tourists visited the resort in 1997. The number of hotels has not increased significantly since then.

In October 2005, Hurricane Wilma caused severe damage to the city of Cancún. The hotel island was meters high underwater. Around 20,000 tourists had to flee to the emergency shelters. The Mexicans took it as an opportunity to renovate older hotels or to leave and rebuild them.

Today Cancún is one of the largest and most visited resorts in Mexico. One of them certainly carries its part of the largest reefs in the region, located directly in front of Cancún. The reef is very popular with divers and snorkelers. Very close to Cancún are well-known prehistoric Mayan sites such as Chichén Itzá or Chetumal. There is a wide range of different day tours to visit the ruins. In addition to hotels, there are also golf courses and numerous restaurants on the hotel island. Vacationers can go shopping in the large shopping centers in Cancún City or the small shops on the island. Cancún currently has almost 900,000 inhabitants.

The sixth United Nations Climate Change Conference was held from November to December 2010 at the Cancun Exhibition Center and Moon Palace Hotel. It was the sixth meeting under the “Kyoto Protocol.” However, the members of this climate conference’s expectations were rather low in advance, as no noteworthy measures were decided in the previous year. However, the members of the Cancún climate summit members expected regulations to protect the rainforests and a climate fund.

The climate fund aimed to support developing countries financially in implementing climate protection. Old bus in Cancún, The Bolivian government, refused to agree to a “compromise” on climate protection celebrated by the leading industrial nations. During the climate conference, the President of Bolivia, Evo Morales, called, among other things, a UN tribunal for climate justice, the reduction of CO2 emissions, and called on the world community to “save the planet.” However, Patricia Espinosa, the conference president, and Mexican foreign minister, only took note of it and declared the final declaration to be adopted. 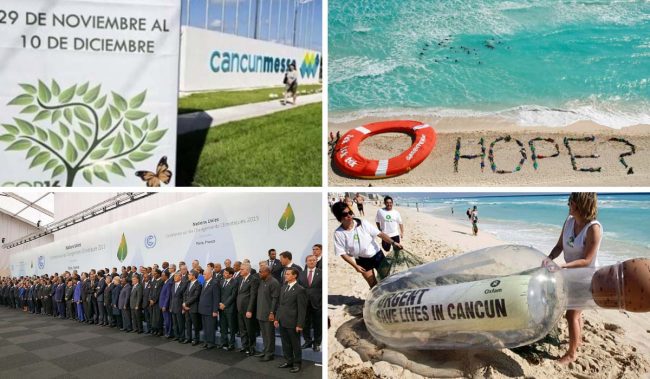 Important Decisions Made at the Cancún Climate Summit

At the Cancún climate summit, the members agreed for the first time bindingly on “international measures for climate protection.” For the first time, the industrialized countries recognized at a climate conference that carbon dioxide emissions should be reduced by 40 percent by 2020. The industrialized countries committed to meeting their voluntary targets at the Cancún climate summit. These goals had already been set at the climate conference in Copenhagen last year.

Also, it was negotiated in Cancún that countries with large forest areas may use these forest areas as carbon stores. The climate conference’s goal was to stop global warming and not let it rise above two degrees. Also, the members agreed to set up a climate fund as emergency aid with an annual amount of ten billion US dollars.

Only Bolivia was not satisfied with the result.

Manage Cookie Consent
To provide the best experiences, we use technologies like cookies to store and/or access device information. Consenting to these technologies will allow us to process data such as browsing behavior or unique IDs on this site. Not consenting or withdrawing consent, may adversely affect certain features and functions.
Manage options Manage services Manage vendors Read more about these purposes
View preferences
{title} {title} {title}
Close